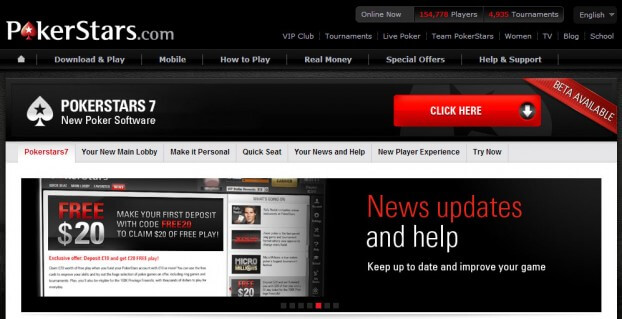 The new redesigned software offers a huge face-lift and upgrade over the existing PokerStars software.

Lee Jones who is the Head of Poker Communications had the following to say about the PokerStars 7 Beta.

Over the last few years, we have invested countless hours to research, design and develop this new iteration of our flagship software. We believe this release is friendlier for new players and more intuitive and powerful for our veterans. So now we’re inviting our players to test the beta version of the software and help us ensure that it meets the high standards that everyone expects of PokerStars.

Players looking for a quick video of the new software can head on over to http://www.pokerstars.com/pokerstars7/ and then click on on the video icon on the right.

All of the brand new features are outlined below.

For a complete list players should go to: http://www.pokerstars.com/pokerstars7/