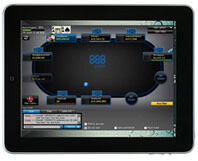 One of the easiest ways to play online is on a tablet device such as an iPad which runs Apple iOS. The first iPad was released on April 3, 2010 and over night became a huge success.  When it launched the iPad came in two different models one which just offered just Wi-Fi and another one that offered Wi-Fi & 3G.

The Wi-Fi only model ranged in price from $499 for 16GB of storage and up to $699 for 64GB.  The dual Wi-Fi & 3G models sold from $629 for 16GB and $829 for the 64GB version.Since the iPad runs on Apple iOS all of the apps that you can download to the device have to be downloaded through the Apple App Store which actually screens all of the apps to ensure they comply with Apples policies.

The app store is the lifeblood to the iPad as without it your device would really only be able to do a few things but with the app store you are able to do just about anything.  If you are looking for some of the top ipad poker apps you should head on over to Poker iPad as they have one of the most in-depth reviews.

We have played on just about every single ipad poker app that you can imagine and its no surprise that the world’s largest poker has hands down one of the best apps available.  If your wondering who its none other than PokerStars.  If you go to the PokerStars website on an iPad you will be automatically presented with the option to download the app.  Once you download it you will start to see why they have one of the best available. You can access the full fledge cashier so you can deposit and withdrawal just like you can from the PC version of the software.

Another site that has a very good iPad app is 888 Poker.  The 888 Poker app allows you to play real money cash games as well as sit n goes and multi-table tournaments.  Another nice aspect of the 888 Poker app is the ability to quickly and easily access the cashier system so you can deposit and withdrawal right from the app.