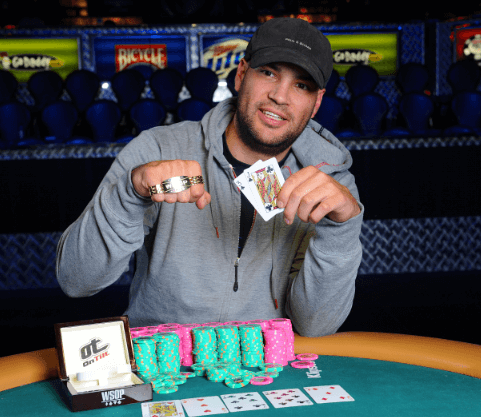 Event #39 was a $1500 7 Card Stud Hi/Lo tournament that had a playing field of 558 entrants. Daniel Idema won his 2nd bracelet in his career (Won the 2011 $10K Limit Holdem Championship) after outlasting the other 16 remaining players early this morning.

Kristy Gazes (17th) was the first eliminated on the final day of action. Another female player, Linda Johnson (9th) was eliminated on the bubble of the official final table. Artie Cobb who is a very experienced stud player was the next to go in eighth place.

The next players to be eliminated were Fei Chu (7th), Tony Gill (6th), Mike Leah (5th) and Matt Vengrin (4th). Raul Paez held a chip lead once play went 3-handed, but after getting bluffed out of a huge pot by Joseph Hertzog he started to go on tilt.

Paez was the next to be knocked out despite starting 3-handed action with the lead. Once HU action started the two remaining players were having plenty of fun. They knocked back 3 double shots of Jagermeister while playing HU for about 90 minutes.

Idema at one point was extremely short stacked during HU play, but he battled back into the game and won. The Canadian will now celebrate his win and I’m sure enter some more tournaments. The final table results are below.