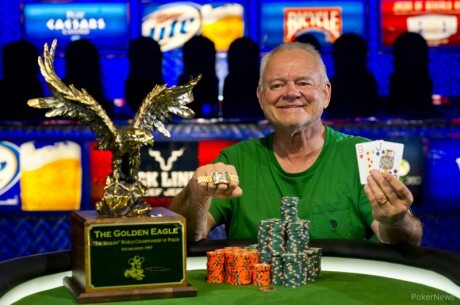 Event #26 had a huge playing field of 4407 players and a first place prize of over $650,000. The $1K Seniors Championship NLHE tournament just finished last night and Ken Lind emerged victorious after playing in his 1st World Series of Poker event.

Heads-up play went back and forth until both players had made hands. On the final hand of the tournament Lind had a straight and Ott had trips. The straight held up and Ott took down the event. I’m sure he’ll play in more events now this year in Vegas.

Bracelets are expected to be handed out in three events today and we’ll update everyone tomorrow with the results. Event #27 ($3K NLHE Mixed Max) is down to just two players (Isaac Hagerling: 2,690,000 Chips vs. Max Steinberg: 2,649,000 Chips).

There are still 16 players in Event #28 ($1.5K NLHE) with Masayuki Nagata leading the way heading into the final day. The bracelet in the $5K H.O.R.S.E. (Event #29) is also supposed to be awarded late tonight. Greg Mueller is leading with 28 players left.