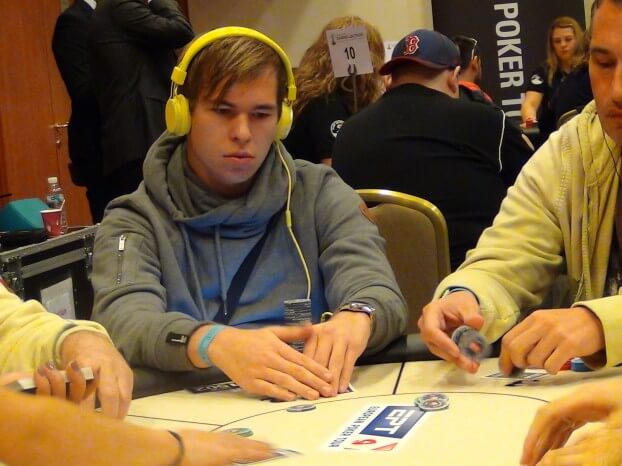 Event #21 just finished a couple hours ago now and Martin Finger emerged as the winner in the $3K NL Holdem (6-Max) tourney. A total of 13 players were back on the felt for the final day (Day #3) including Erik Seidel, Dan Kelly and Nick Schulman.

None of those three players made it to the final table, as they were eliminated before the final six. The final table consisted of Finger, Matt Stout, Matt Berkey, David Pham, Nikolai Sears and Andrew Dean. Finger had the chip lead to start the final table.

By the time the action went heads-up between Finger and Stout it was Stout that had the chip lead. The heads-up match took 98 hands to complete. Finger was able to comeback from a big chip deficit to claim the bracelet and $500K+ in Event #21.

On the last hand Stout raised preflop with A/7 off-suit. Finger 3-bet with Q/Q and Stout 4-bet all-in. Stout was unable to spike an ace from the deck and Finger’s pocket queens held up. I’ve listed the payouts from the final table below.

Yesterday Calen McNeil won Event #20, which was a $1500 Omaha Hi/Lo Eights or better tournament. McNeil and Kim Hua had to come back to finish playing heads-up. When the action started yesterday Hua only had 5.5 BB’s to work with.

Hua battled tough though and was able to take over the chip lead against McNeil. At one point Hua had built up a 2/1 chip lead in the match and it looked like he was going to be able to pull off the comeback after starting the day short stacked.

The final table had a strong field for one of the smaller events and included Todd Brunson, Tony Ma and Stephen Chidwick. The Canadian, McNeil, took home over a quarter million dollars for winning the event that had a playing field of 1014 players.

We’re not through 21 events in Vegas at the 2013 World Series of Poker and Daniel Negreanu leads the POY standings. He has a total of 427.15 points already. Benny Chen who has been running great this summer is in 2nd place right now with 300 points.

Mark Radoja, who won the $10K Heads-Up Championship (Event #16) is 3rd in the POY rankings with 292.50 points. He’s followed up by Daniel Kelly (269.70 Points) who has been doing great in Vegas as well. It’s still early, but these are the early frontrunners.