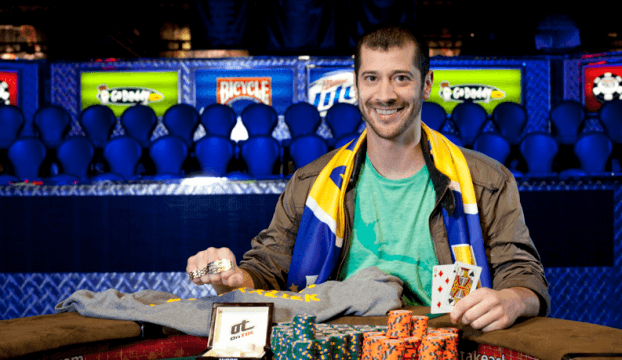 Athanasios Polychronopoulos won his 2nd career World Series of Poker bracelet on Day #13 at the 2013 WSOP. The only bracelet that was awarded yesterday was in Event #17 ($1500 NL Holdem) and 15 players were left on Day #3 to fight for the title.

Event #17 had a playing field of 2105 players, but just 15 of them made it to the final day of the event. Barry Greenstein was still in the hunt on the final day, but he was eliminated in 11th place after his A/3 of clubs lost to the K/Q off-suit that Baker called with.

The final 10 players were moved to the ESPN Feature Table where they played out the rest of the tournament. David Baker who has already made the final table of three events at the 2013 WSOP was eliminated in 8th place in Event #17 last night.

Joe Ward and Michael Kurth were the next two players to be eliminated from the final table. Polychronopoulos had the lead in the event once the play went 5-handed and he never looked back although he did have some “luck” on his side last night.

Joe Cada who was the biggest name on the final table at Event #17 was eliminated in 4th place. Cada also was knocked out in 4th place earlier in the series in Event #4. Cada had an A/Q against the A/J of Polychronopoulos, but Cada lost the hand.

Everett Carlton was the next to be eliminated after his A/6 was unable to improve against the A/J of Polychronopoulos. It didn’t take long for Polychronopoulos to end the tournament once the action went heads-up either late last night.

Mutke called the all-in and looked like he was about to double up. After both players paired their Jacks on the flop it looked like the Ace kicker of Mutke would be enough, but Polychronopoulos was lucky again and he hit a Queen on the river to win.

Believe it or not, but Ivey has never won a WSOP Holdem tournament in his career yet. He still has a lot of work to do once play resumes today, but we’ll keep you updated. Ivey has played in nearly every WSOP event this year, but this is his first cash.

A total of 16 players will be back on the felt to fight for the bracelet in Event #19 today. Dan Kelly is fourth in chips (283,500), but the final day has a stacked field that includes 3 PokerStars Team Pros (Dario Minieri, Eugene Katchalov & Bertrand Grospellier).