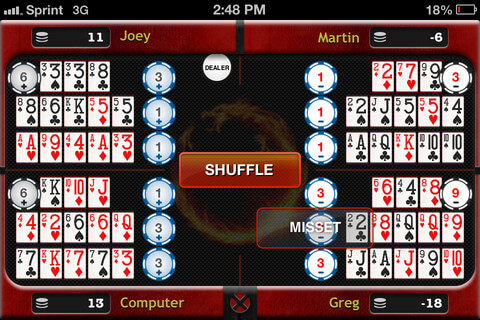 Generally when a poker player shows up on the Internet with accusations about rigged software and cheating they get chastised, teased, and humiliated.

But when the poker player in question is Barry Greenstein the allegation will get a little more weight, considering Barry isn’t going to go off on some half-cocked theory about rigged poker.

On Friday Greenstein wrote an interesting blog at PokerStars regarding one of the most popular games in poker, Open Faced Chinese Poker, specifically targeting a popular App players use to play the game for real-money on their iPhones and iPads.

According to Greenstein he had a nephew who is a computer programmer look at the App after getting drubbed by another player, and suspecting he was being cheated. What Greenstein’s nephew found was very troubling, and also problematic considering the naivety of some in the poker world and their willingness to risk large sums of money sometimes with complete strangers:

“My nephew downloaded the app and once he had a chance to start looking at it he called me back within 30 minutes. He said anyone who’s a programmer who knows how to hook up an iPad to another computer could easily cheat using the app.

“Using a proxy server, with the current version of the app, you can see all thirteen cards of yours and your opponents when each deal is begun. Most cheaters wouldn’t spend the time to change the cards as my nephew did. They would know whether their flushes and full houses were going to come in, which allows them to play efficiently like normal Chinese poker.”

Open-Faced Chinese Poker is a very popular game, especially among professional players who play the game for as much as $100 a point, or even higher in some cases. With the game’s popularity a number of Apps have appeared to whet players’ appetites for the game, and as Greenstein points out, many of these Apps are designed for fun, and do not have the security and encryption of real-money gaming software.

Greenstein used the blog to make two very good points: Most importantly, be careful with whom you play games such as this. Not every person in the poker world (or in real-life) operates on the same moral ground.

Secondly, Greenstein reiterated an old poker adage of sorts, warning players to listen to their guts when they feel something isn’t quite right in a game. This advice would have been very useful to some of the players who were cheated at AP and UB Poker over the years.

You can read the full blog here:
http://www.pokerstarsblog.com/team_pokerstars_blogs/barry_greenstein_1/2013/dont-get-cheated-on-the-open-face-chines-130327.html