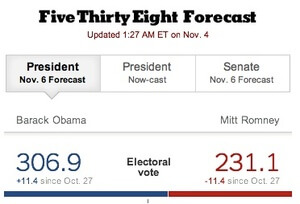 You can judge for yourself by reading his full response to the following question by “tryagainbucko4”:

”Do you have any wisdom on the efforts to legalize online poker in the United States? Do you see the federal approach as viable? Do you still read the two plus two forums?”

My hunch is that the poker community probably underrates how difficult it is to get ANYTHING done at the federal level, especially in the near term.

But the intersection of the need for more tax revenues, poker having become increasingly mainstream, better lobbying efforts on behalf of the poker community, etc., bodes reasonably well in the medium-to-long term.

From a public policy standpoint, it’s ridiculous that so many states allow the lottery but not online poker. The demographics of poker tend much more toward people who can “afford” to gamble.

The author of the current New York Times bestseller, The Signal and the Noise, is a former poker player who first made a name for himself as a baseball number-cruncher a la Moneyball, before moving on to become the most accurate political predictor perhaps ever on his FiveThirtyEight blog at the New York Times.

Silver’s comments seem to hint that he feels online poker legislation will go through the states rather than at the federal level, and with Nevada poised to offer real-money online poker games in the coming months it will be interesting to see how many other states follow suit. While the poker community is still holding out hope for the Reid/Kyl bill (which we discussed earlier this week) the safe bet is for the states to legalize and regulate the industry in the US, and hopefully form partnerships that would allow states to pool their players.

One example we have seen in recent times that may signify what legalized online poker at the state level would look like is Spain. Since legalizing and regulating online poker Spain has seen 700,000 players register real-money accounts and with a 25% tax on providers managed to clear over $27 million in tax-revenue for the month of September. This type of revenue could be a boon to states that are sorely in need of new revenues to ease their budget deficits, especially a state like California.