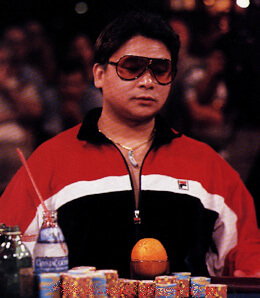 Although it has become the “go to” genre for success in the world of television, “reality” shows – where the people involved are the stars of the show and are allegedly just living instead of being scripted – have never really caught on in the poker sense. Previous attempts have fallen flat and (especially following the collapse of the online game in the United States) few networks have green-lit poker-related reality programming. That could be changing soon if a YouTube video is successful.

Posted on Sunday, the YouTube video is promoting an effort from former two-time World Champion Johnny Chan called “Full House with Johnny Chan.” The concept is similar to several of the reality television already in existence (“Big Brother” and “Top Shot” come to mind) where the competitors live together in a domicile and, as the show plays out, the participants bicker, fight, get “lucky” and basically do anything that guarantees great drama. The difference with “Full House with Johnny Chan” is that the participants actually play poker to get the drama going.

The video opens with Chan introducing himself – rather stiffly to be honest – and there is a terrible “drop in” in mentioning Chan’s ten World Series of Poker bracelets (he also calls himself the “most famous poker player in the world,” which may come as news to some). After these missteps, Chan lays out the premise of the show: five unknown poker players come to the Chan Mansion in Las Vegas and are staked with $200,000 in cash (allegedly from Chan). The players stick around as long as they have that bankroll; once a player loses that stake, then they have to leave and are replaced by another competitor.

In between the daily “sit and go” tournaments and cash games that are played, there is plenty of time (at least by the premier video) for the competitors to needle each other, pull pranks and hit the streets of Las Vegas. There is a simple problem with this concept, however. The players involved in the production of “Full House with Johnny Chan” are stereotypes that the poker playing community might be tired of.

The five players involved (and we won’t get into their names because they aren’t really that interesting) include “The Playboy,” “The Genius,” “The Queen of Hearts (yes, a female),” “The Bully” and “Chico Loco (my limited Spanish translates that as “young and crazy”). After their brief introductions in the premier video (including showing some playing styles, which annoys you a bit more), some of the hijinks the quintet get into are shown. Overall it isn’t too interesting, which might lead some to believe that the reality show may get play only online rather than with a network.

For some reason, Chan’s fellow poker legend Doyle Brunson is included in the premier video, but it is tough to tell how extensive his involvement in the production is.

There are a few warning signs that show up that this might not be the “poker reality show” that the poker community is looking for. For the YouTube clip, the comments section has been disabled for anyone that views it (currently it has slightly more than 11,000 views). This is a bad indication as it seems that, if the producers of the show got feedback they didn’t like from initial comments, they decided to shut down any further commentary rather than try to fix the program.

This hasn’t stopped the subject from popping up on the Two Plus Two message board. A 270-plus thread has sprung up there and the comments should be a warning to Chan and his team. “Is this the Douchebag House or something,” one of the posters commented about the contestants. “I’ve seen one of these guys playing $1/2 at Mandalay Bay before…show looks stupid,” states another. “Is this going to be webisodes because there is no way any real channel will pick up this crap for a real show.” To perhaps top it off, another commenter wrote, “This was worse than any poker scene ever in a procedural crime drama, and that is really saying something.”