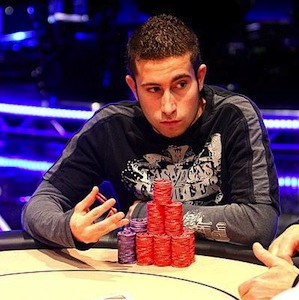 Nearly nine months after former World Champion Jonathan Duhamel was attacked, beaten and robbed during a Christmas home invasion, the case is slowly working its way through the Canadian court system. This week, it was learned that the “mastermind” behind the attack – Duhamel’s ex-girlfriend – will plead guilty to the charges that she faces.

According to several Canadian media outlets Bianca Rojas-Latraverse, who dated Duhamel after his victory at the 2010 World Series of Poker Championship Event for approximately six months, will plead guilty to a host of charges she faces in the case. Facing charges of armed robbery, breaking and entering, forced confinement, assault and conspiracy in the December 2011 attack, Rojas-Latraverse’s trial was supposed to have started last Friday. It was delayed, however, after Rojas-Latraverse was mysteriously “attacked” while in custody (where she has been since her arrest in January) and the court allowed her to seek medical attention.

Back on December 21, 2011, Duhamel’s home in Boucherville, Quebec was visited by two men who, after ringing the doorbell and Duhamel answering, forced their way into the home. Tying Duhamel up and beating him repeatedly, the two men forced Duhamel to open a home safe they apparently knew about which contained several mementos of Duhamel’s poker achievements. Before leaving a battered Duhamel tied up in his home, the thieves took his WSOP Championship Event bracelet, a Rolex Submariner watch given to him by his sponsor, PokerStars, to commemorate his victory, and approximately $140,000 in cash in various forms (Canadian and U. S. dollars and Euros).

The Canadian authorities acted quickly on the case, arresting several persons within days of the attack. Rojas-Latraverse – who is alleged to have given much of the information on Duhamel to her accomplices as well as aided in planning the attack – was arrested on December 23 after a witness turned in a text message that she had received from Rojas-Latraverse. “Tomorrow at 10 think of me,” one of the text messages the witness received in the early morning hours of December 21 from Rojas-Latraverse read (the attack occurred within hours of that text). “Everything is planned…we even have a driver if I choke.”

Rojas-Latraverse also quickly named her fellow conspirators in the case. On December 26, Canadian authorities arrested John Stephan Clark-Lemay and Anthony Bourque in a local hotel, where they allegedly were partying and spending large amounts of money. The duo was arrested on the spot with a third man, Andre Perron, who was wearing Duhamel’s Rolex at the time.

In February, another portion of the stolen Duhamel money was found in a post office box. The WSOP bracelet was found later that month after a street cleaner picked it up on a Montreal street and, while emptying the collection bin, discovered the jewelry. It was badly damaged, with Duhamel’s last name scratched off the back, and had none of the links that originally held it together.

At this time, Clark-Lemay is still in custody awaiting trial, while Bourque made bail in January and will appear in court October 15. Perron was released shortly after being arrested on his own recognizance and also still faces charges.