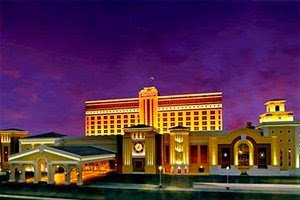 The site has been operating a play-money version of their software for several months, and plans to have the real-money games ready for Nevada residences (the play-money site will still be available to players across the country) by October, after independent testing labs and the Nevada Gaming Control Board approve of the South Point software (powered by Zen Entertainment).

The play-money version of SouthPointPoker.com is available for download or opening in a new browser window, it also allows players to register using their Facebook account. While the software is adequate, it’s a far dry from what online poker players are used to, and I would expect a lot of complaints if the software is not upgraded prior to the real-money launch.

As of now SouthPointPoker.com offers a few different No Limit Holdem tournaments, and the site’s traffic is sparse. The software reminds me of other free-play sites that you might find on Facebook with the downloadable version only slightly better than the Flash version. The site’s table-windows also feature distracting ads, which is a terrible decision on South Point’s part if they allow these at real-money tables.

South Point joins Bally Technologies, IGT, and Shuffle Master as entities that have been granted a license to be an operator, manufacturer and service provider of interactive gaming systems in Nevada; meaning the will be allowed to operate online poker rooms in the state of Nevada. Other companies still awaiting the approval of their license applications are huge names in the casino industry like Caesars Interactive Entertainment and MGM, as well as online providers like bwin and 888.

The real question (for South Point and for future operators) is whether Nevada will act as a stepping stone to more legislation, either at the state or federal level, or if the small user base in Nevada will show the flaws in the intra-state system. Like many people I fear the small population in Nevada will be a major obstacle in online poker’s liquidity, and may be used as a reason for obstructing online poker legislation in other states – using the “it failed in Nevada, and that’s a gambling state, so why would it work here?”