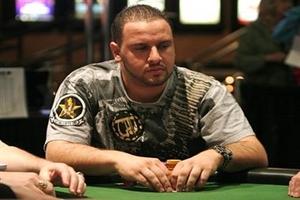 It’s hard to admit when you’ve been taken, but when the amount that someone has scammed you for reaches six-figures your wallet tends to outweigh your pride and trying to recoup your losses as well as protect the rest of the poker community becomes the utmost concern; which is exactly why Mike “The Grinder” Mizrachi fired off the following series of tweets on Thursday:

Question?What If someone makes a bet lays 5-1 on a bracelet bet u lay 20k to win 100k and when It comes to pay he says he files bankruptcy!

Hi Michael I am sorry but certain circumstances came up and I had to file bankruptcy. I listed you to in the list and I know you received
letter from the law office Bricks. Again I am sorry but there is nothing I can do

Will reveal the name after. Keeps going on and on. His last words. This is my last answer. GL in your Tournament’s

Any thoughts? He claimed to have a bet with Durr last year and collected … Obviously took a shot at me to win 20k and couldn’t pay !!

Offered him a payment plan… Said there’s nothing he can do. Just claiming his bankrupt. Why make the bet!!Why not cancel during series?

My fav 1: Sorry this happens after the bet. During the WSOP the multibank did a garnishment and I dident get the 46000 I won in event 9.

This is why I could play more any events at WSOP. Sorry but you should now after bankruptcy there is no payment to nobody.

Sorry but you should now after bankruptcy there is no payment to nobody. Trustee is in charge. Sorry for any inconvinience finished 12

In the Poker World you can Run But you can’t Hide! Just don’t want it to happen to some 1 else!

Of course, as with all poker debts, once one is made public the floodgates are opened, and apparently The Grinder isn’t the first person to fall victim to Giorgio Medici:

I just heard Giorgio Medici stiffed a game for 50k! Wow! All coming out…my fault. I wish I knew before hand!

Unfortunately, this is becoming all too common in poker in recent times, as several other players have also been called out over their debts and failure to pay including David “Chino” Rheem and Erick Lindgren.

Mizrachi is all too familiar with bankruptcy, having had his own financial issues back in 2010, until he got back on track with his monster 2010 WSOP, which included a number of final tables, including the WSOP Main Event and the first of his two $50k Poker Players Championship titles. In May of 2010 Mizrachi’s debts culminated with two of his properties being foreclosed upon, which The Grinder blamed on some bad investments and the housing bubble collapse of late 2008. At the time Mizrachi fired his accountant and told the Sun-Sentinel, “Obviously, I’m a better poker player than a businessman, but I’m getting better… I’ve smartened up. We’ll be OK.”

We’ll keep you updated on this story as it continues to develop, and in the meantime you can follow Mizrachi via his Twitter account at @TheGrinder44