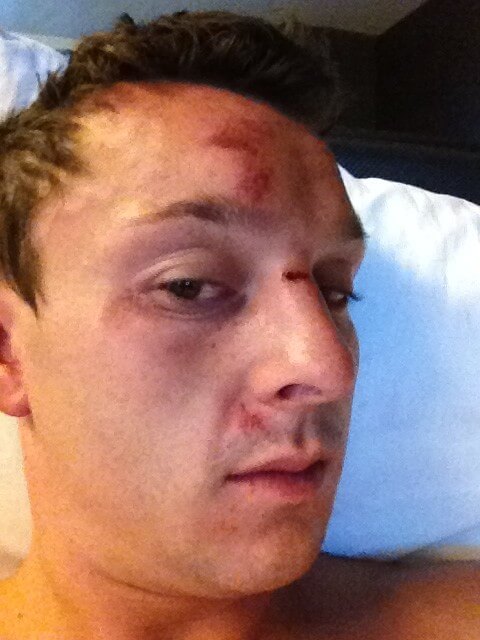 After coming in second-place at the Big One for One Drop tournament on Tuesday, and winning over $10 million in the process, Sam Trickett was likely on top of the world, and along with his entourage of family, friends, and supporters went out to celebrate the massive win. Unfortunately for Trickett the celebration didn’t end well as he was attacked by a group of six men, who left the UK poker superstar bruised, battered, and bloodied, over what Trickett’s girlfriend deemed “nothing”.

Here is a look at the series of Tweets Trickett posted on Wednesday night on his Twitter account Sam Trickett ‏@Samtrickett1 as well as two Tweets by his girlfriend Natasha Sandhu:

Is this what happens if ur successful? literally beat the shit out of me and spat in @NatashaSandhu face all over nothing…
Natasha Sandhu‏@NatashaSandhu Ok so I can say now…last night didn’t end so good, left the club and 6 guys jumped sam….I have tweeted a picture…

It wasn’t a mugging or anything just over nothing, sam is fine..gonna spend some quality time together now 🙂
Sandhu was also spat on at some point during the incident, and it’s unclear what started the fight at this point, or if Trickett and Sandhu have filed a police report.

Based on the Tweets above, it would seem Trickett drew the ire of the six cowardly attackers for nothing more than being young, successful, and having a good time.

The assault is somewhat reminiscent of a story told by another one of poker’s young guns Jason Mercier, who recounted being stabbed in San Remo, Italy after celebrating a big poker win. Mercier told Bluff Magazine in an interview back in February of 2010:

“Well, basically, here it is. After I won the $1.1 million, I went out to celebrate with some friends at a club in San Remo … and I was stabbed.” Adding, “I want to tell the story now because it really changed my life, and, if this is a story about my poker life, it should be a part of it,”

Mercier was one of the many members of the poker community who Tweeted to Sam and Natasha after hearing about the incident, saying: “@Samtrickett1 been there before brother. Sorry to hear that happened #justbadluck obv”.

Hopefully the more than $9 million in profit that Trickett won in the One Drop tournament (where he was rumored to have 50% of himself, clearing the 26 year-old an impressive $4.5 million) will help ease the pain and he can take a nice, long, vacation to heal up his wounds.