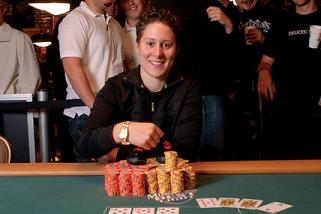 Vanessa Selbst’s victory in the $2,500 10-Game Mix at the 2012 World Series of Poker ended a streak of over 250 open-events at the WSOP (no restrictions on entry) in which women failed to win at the WSOP. The streak dates back to 2008, when Vanessa Selbst won the $1,500 PLO tournament, and was the longest drought for the ladies in the modern era (post 2003) of the game.

This was Selbst’s fourth cash at the 2012 WSOP and her second final table, having finished 4th in Event #2, the $1,500 NLHE tournament, and cements her place as the top female tournament player in the game, and puts her among the top players of either sex. The bracelet, her second open-event win at the WSOP, also puts her in very elite company, as the only other female with two open-event bracelets is Jennifer Harman.

Selbst took the chip lead into the final day of play, which saw 19 of the original 421 players still in the hunt for the bracelet, and when the dust settled it was Selbst who would raise her hands in victory and celebrate with a rail that included other top female players like Liv Boeree, Maria Ho, Xuan Liu, and Vanessa Rousso, as well as Scott Seiver, Mickey Petersen, and Nick Binger to name a few of Selbst’s supporters.

While it’s never easy at a WSOP final table, Selbst seemed to be in control from the get-go and cruised to the title, which she explained in an interview afterwards: “In the beginning I was getting pretty fortunate to win a bunch of big pots and scoop a couple of big ones in Stud Hi-Lo. Once I got the big stack and the other stacks were shorter, in the blind games I could open up a little bit more, like No Limit, Limit, PLO and stuff like that, because they had to worry about the pay jumps and things like that. Honestly in the beginning it was just sort of playing my cards… honestly I ran so good that, once I had the chips it was kind of easy,”

The quote of the day however goes to Selbst’s girlfriend Miranda Forster, who posted a picture on Facebook, with the caption: “This is my girlfriend. She wins things.”

Tom Chambers, who finished in 5th place, has had a breakout 2012 WSOP with four cashes and three final tables at the tournament series, including a 3rd place finish in a $1,500 NLHE tournament that saw him pocket nearly $300k, his largest live tournament cash to date.