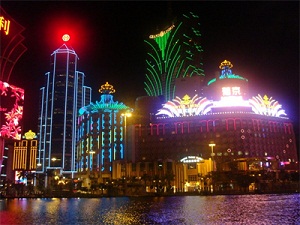 If you’ve ever wanted to participate in a HKD $1,000,000 (about $130,000 USD) rebuy tournament PokerStars and the Guandong Group are now giving you the opportunity at the just announced, Ltd Asia Millions’ (GDAM) tournament that will take place in Macau from June 5th through June 7th. PokerStars is billing the event as the biggest tournament ever held outside of the World Series of Poker, and expects it to break attendance records for high-roller tournaments.

The tournament will be held at the PokerStars branded City of Dreams Poker Room in the city of Macau, which is starting to give Las Vegas a run for its money as the gambling capital of the world. The Tournament will be a three-day event; with players able to rebuy two-times (presumably on Day 1 of the tournament only). On June 4th there will be a “warm-up” tournament, boasting a HKD $250,000 buy-in (about $32,500 USD).

Interestingly, the tournament will be competing with early WSOP events for players, but considering this is a PokerStars tournament I’m assuming many Team PokerStars Pros will be making the trip to Macau for the event. Considering travel time, players leaving the WSOP to head to Macau for June 5th would be foregoing at least some of the following WSOP tournaments:

According to the PokerStars blog seating is limited, so they may not even be trying to attract WSOP players:

“The field will comprise many Guangdong Group members, and limited seats are available to other players. PokerStars will also offer one player the chance to qualify for the GDAM event online. The prize package will be worth USD $132,000, and will be the biggest-ever tournament package given away on PokerStars. For more details about how to qualify, visit www.pokerstars.com/poker/promotions/GDAM/”

In the blog post, Danny McDonagh, Director of Live Poker Operations for the Asia Pacific for PokerStars said, “We are expecting over 100 players to sit down and play and one of the biggest prize pools for a poker tournament outside of the World Series of Poker. It’s going to be seriously huge! ”

Last year a HKD $2,000,000 buy-in tournament was held in Macau and managed to attract 73 players, so setting the bar at over 100 seems like an easily reachable goal. The aforementioned Macau High Stakes Challenge Super High Roller tournament is the current record-holder for the largest non-WSOP tournament prize-pool in poker history, coming in at over $23.5 million, so the goal to break that record may be a little harder to reach than the attendance record.

Stay tuned for more details on this tournament in the coming days and weeks.